Every day we come across useful information when we browse the Internet on our smartphones. Copying the useful information and sharing them helps us to carry knowledge exchange process. Sadly most of the information natively doesn’t support or allow users copy it on an as it is basis. This is one of the areas where Android and IOS failed miserably. 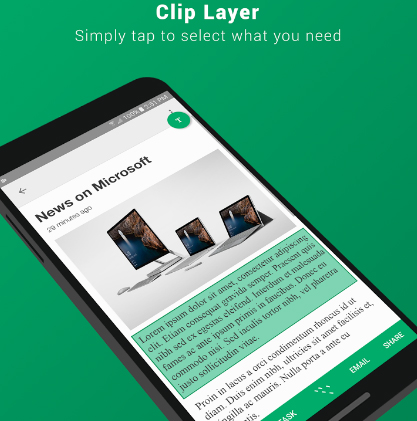 Traditional clipboards in android and IOS copy content only when language processor detects it. When the content exists in image formats, it hardly detects and becomes obsolete. Knowing the problems of having a clipboard that doesn’t come in handy in useful times, Microsoft’s Clip layer app seems to solve out the minor issues when using the clipboard. The app is available for free on Android and IOS as well. The overall performance and working of the app is truly the best. Just as you would expect, clip layer lets you select the portion of the screen and you can clip snippets from different apps, screenshots, web pages and other sources.

Once the information is stored in Microsoft’s clip layer you can share it with others.The app functionality is pretty simple. It launches over on any screen. For this, you have to grant accessibility permissions in the settings app. Once the app is launched, Microsoft automatically identifies the texts and highlights them with black block border. Then further actions can be executed on the selected portions of text.One advantage of having clip layer over a traditional clipboard is it doesn’t require users to drag and select the portion of text. Instead, it detects all of the text with zero chance of error. To access or have a preview of what had copied to clip layer, the T icon on top of the app gives you an insight. If the block of text extends beyond multiple pages, the app stores the information in lexicographic order rather than the order of appearance.

This app has some serious drawbacks, but they won’t interfere your work in any way. Games are one area where clip layer finds to be useful, but it is less likely operational during games. Since the app had launched recently, more features are likely to be added in later versions.

Clipboard was designed and developed by Steve won when he had difficulties in selecting and downloading a picture. Clip layer is currently available for free on Google play store. And it occupies a minimal of 7MB space on your device main memory. There are no in-app purchases and the app is absolutely free. The team also expressed it will soon roll out the app on apple’s app store.