Vivo Nex is reported to be unveiled at an upcoming event scheduled on June 12, 2018. Just now, a picture revealing specifications of the upcoming Vivo Nex has been surfaced online. As per the leaked image, the Vivo Nex smartphone will carry a 6.59-inch display fuelled by a massive 4000 mAh battery.

Storage-wise, the phone will get a 8GB RAM combined with 256GB of native storage space.

No camera details of the phone has been known as of now. It is expected that the device will flaunt a dual rear camera setup. 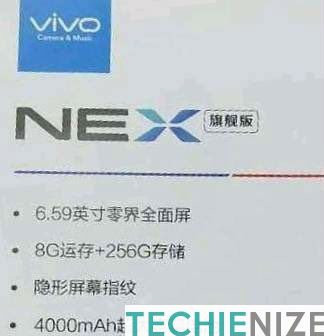 It has been recently reported that the Vivo will launch three different variants of the Nex smartphone, namely Vivo Nex S, Vivo Nex and Vivo Nex A.

Another mid range variant of the phone will be launched as well. The variant will be powered by Snapdragon 710 chipset combined with 4GB RAM.