Xiaomi has acquired the entire market of China, and India. Often called as the Apple of China, Xiaomi keeps on launching something or the other new to keep the buyers attentive. Currently, it is in highlights because of the new redmi Note 5 super duper hit Smartphone model. The new flagship is expected to get launched in the second half of 2017. It features a nice 5.5 FHD display and 64 GB internal memory. The phone is much featured than the rest of the budgeted models launched by the company so far. So let’s know more about it- 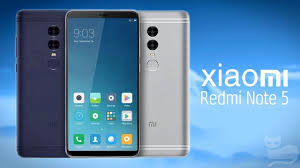 The first thing that any users are on the phone is it displays. The 5.5 inch in long screen comes with capacitated touch screen feature. The overall resolution is 1080 X 2160 pixels that accounts for 403 per inch. Users often complained the lack of gorilla scratch Glass on redmi smartphones. The company has given attention to such feedbacks, and the new model is launched with Corning Gorilla Glass display.

Another best part of Xiaomi note 5 is 2 gigahertz Octa-core Qualcomm Snapdragon 625 processor. The phone smoothly runs despite opening up multiple applications simultaneously in it. With a large internal storage of 64 GB, you can count as many games and videos as possible. Additionally, you can insert 256 GB memory card for further expanding the internal memory. The graphics processor of the phone makes sure that you can play full pleasure digital games without hampering your visual experience.

With 4000MAH battery power, Xiaomi never disappoints its uses regarding battery power. Even the previous models of the company were blessed with powerful batteries that kept the users clinging to their phone.

The redmi note 5 hi great connectivity through GPS, Wi-Fi, Bluetooth 4.0 and hotspot feature. It lets you insert 4 G network sim card along with an additional 3G or 2G network.

Although the previous Smartphones from Xiaomi have slightly disappointed as regarding snappers, this model is an upgraded one. The redmi note 5 comes with 12 + 12 MP dual Shooter that keeps your selfie clear and beautiful. The more of a selfie oriented smartphone lets you integrate autofocus, HDR, video recording, touch focus and face detection feature while using the snapper. The front camera has been capacitated to shoot 5Megapixel selfie

The expected price of redmi note 5 is 9999 INR. It is Soon to get launched in the leading E-commerce website such as Snapdeal, Gear best and Flipkart. Xiaomi particularly develops smartphones that match up with the current requirements of the customers. The flash sale can give you up to 20% off on the latest models by redmi. You can spot the model on Gearbest flash sale soon. This is one of the perfect smartphone device to have with your at this time with such a priceless features.