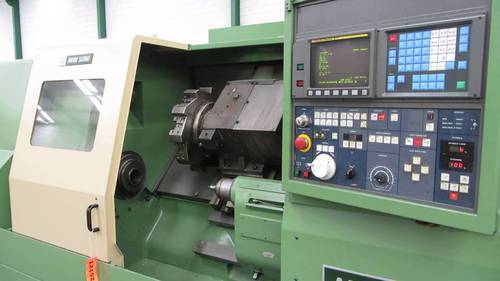 Contrary to what most people believe, CNC machines have been involved in manufacturing for nearly 80 years. While they were key in helping many new innovations come along in earlier manufacturing processes, it has been the past several decades where the most tremendous strides have taken place. Used to manufacture everything from autos on today’s roads to state-of-the-art medical equipment and sophisticated military jets and other equipment, CNC machines have played a vital role in changing manufacturing in many ways, and are expected to continue doing so in the coming years. As for how they have accomplished this, here are some of the most important ways.

Prior to the widespread use of CNC machines, most companies relied on machine operators to operate such machines as drills, lathes, and routers. As a result, many processes took longer than today, since the operator would have to continually change the position of a part by hand, but only after spending time reading blueprints to determine the best way to do so. However, today’s CNC machines use 3-D modeling CAD files and other software, allowing computers to control the machine and continually readjust part positions, dramatically reducing manufacturing times.

As CNC machines have been able to integrate more and more aspects of modern technology into their components, the result has not only been faster manufacturing times, but also much greater precision and accuracy in making various parts. Using sophisticated software, the machines are able to quickly calculate numerous measurements and position parts so that they can be quickly made to specifications. As a result, far fewer errors occur, leading to faster production as well as less waste in terms of materials, saving companies money along the way.

As CNC machines have been able to make parts more precisely and accurately, companies have been able to greatly increase mass production of items. Due to the much easier ability to create prototypes of parts and other devices, engineers can make changes much quicker and much earlier in the manufacturing process, which leads to items being able to be mass-produced at higher rates. Thus, whereas a decade ago only a few hundred parts may have been able to be made during a production shift, that number has now jumped to several thousand or even more.

In years past, manufacturing machines may have needed to be shut down for hours at a time, since they require human operators. However, as CNC machines have become more advanced and reliable, most are now able to run 24/7. By doing so, they not only increase production tremendously for a company, but also have the ability to complete more than one operation at a time. Thus, it becomes possible for a machine to be programmed by engineers to perform multiple tasks overnight, then have the finished product waiting for them when they arrive at work the next morning.

As CNC machines have become more and more advanced, they are now able to make parts and devices that may have seemed impossible only a few years ago. In fact, CNC machines are often credited for helping revolutionize the medical field, since many different types of medical devices and equipment are now made using many components of CNC machining. Whether it is a state-of-the-art pacemaker for a heart patient or a surgical instrument used for neurosurgery, these are but two examples of how these machines have helped save lives.

Though CNC machining has come far since it was introduced over 80 years ago, many more exciting developments are expected in the decades ahead. As even more sophisticated computer software is used with these machines and AI begins to be implemented in them as well, industry experts predict the sky’s the limit to what can be accomplished. From medicine to military operations and more, CNC machines will lead the way in innovation.